A Muslim narrative in the anti-CAA/NRC protests

Updated: January 23, 2020 7:39:24 pm The country had, for long, not seen Muslims coming out on the streets to protest against the communally targeted policies of the state. (Express photo) (Written by Nizamuddin Ahmad Siddiqui) An article in... 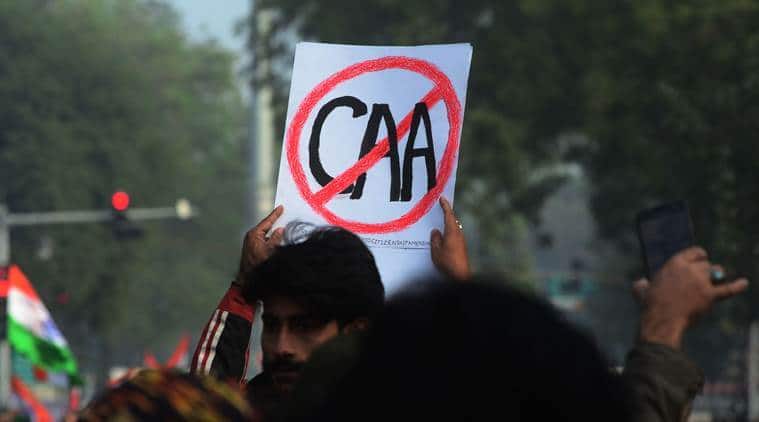 The country had, for long, not seen Muslims coming out on the streets to protest against the communally targeted policies of the state. (Express photo)

An article in this publication by Irena Akbar (IE, January 3) reinforces what many people, like me, have been troubled with recently – how to protest against the communal policies of the state? Can there be a Muslim rejection of the state’s anti-Muslim narrative? How do we build upon that? But as it stands, things are now out in the open: We do have a Muslim narrative within the bigger picture of the anti-CAA/NRC protests continuing throughout the country.

When I visited Delhi to take stock of the situation on December 24, my immediate aim was to visit Jamia Millia Islamia. I had been getting the reports through media, but I desired a more direct image of the ground realities. There were two reasons – first, my brother and many of my friends studied there (Jamia being one of the preferred destinations in Delhi for AMU graduates); second, I have been visiting the place for more than a decade now and have experienced life in and around the university campus first-hand.

There was an even bigger reason: I wanted to see how Muslims were protesting against the CAA/NRC. I wanted to be a part of the crowd. Being a Muslim myself, I had been largely unaware of what could be the nature of Muslim protests in India. The country had, for long, not seen Muslims coming out on the streets to protest against the communally targeted policies of the state. I had been exposed to the literature on Muslim contributions to the Indian freedom struggle, but that story was part of history. What was happening on the ground in December 2019, however, seemed completed unprecedented. There are numerous videos on YouTube and those that are being circulated in the media where Muslim scholars from India are asking the people to continue their protest with calmness and restraint. (Express photo: Tashi Tobgyal)

When Salman Imtiaz (The Hindu, January 1, 2020), president of AMU Students’ Union, writes about the state atrocities on campus and calls AMU and Jamia as epicentres of national awareness, he invokes minority identity as the basis of the students’ struggle. When Rajshree Chandra (The Wire, January 1, 2020) dedicates her article to a “90-year-old woman with a mouth with no teeth and a sharp tongue from Shaheen Bagh”, it projects an image of Muslim women never imagined before. Similarly, when Irena Akbar resorts to wearing “hijab” and chants “Allahu Akbar” during protest just to speak against the policies of the state, it goes a long way in reinforcing what we might see as negotiating the Muslim identity in post-secular India.

The ongoing protests by Muslim citizenry has the potential to re-establish the waning Muslim identity in the larger political fabric of India. Again, for instance, Seema Chishti (IE, January 4) too underscores the usage of the tricolour, Constitution and Ambedkar as symbols which have helped Muslims better articulate their protests as well as garner support across religious divides.

I remember when, having missed the train to Aligarh on December 25, 2019, due to traffic on account of protests in Delhi, I got the opportunity to discuss some of the issues with my friends. One of the questions that engaged me then was, how can secular politics provide a safeguard against the communal politics of the majority? A bigger question: Can religious identity or religious discourse be a sub-narrative to the bigger secular narrative? This is what Gandhiji did, and this is what Muslims gathered throughout the country are doing — they are re-affirming their right to be part of the Indian citizenry. (Express photo: Tashi Tobgyal)

I find the answer in two things: First, in the history of post-independent India and how the Indian Constitution provides safeguards to minorities, including religious minorities; second, in how people could gather and re-claim their rights through peaceful protests when the state engages in authoritarian tendencies. This is what Gandhiji did, and this is what Muslims gathered throughout the country are doing — they are re-affirming their right to be part of the Indian citizenry.

However, what remains unfortunate is that most of the major political parties in the country have decided to remain silent on the religious minority issue (even though they seem ready to fight the battle on other constitutional grounds). Like the Indian judiciary, political leaders too stand spectators to this game; as if the politics of the religious minority has lost its sheen.

But the brave Muslim citizenry, joined by others now, have stood against the policies of the state with great confidence. More interesting is, this time the politics of the minority is not shaped by the “representatives” of the minority community but by the “community” itself, led by its youth and women.

I remember after the Asr prayers at Jamia on December 25, when students gathered around the imam and sought his counsel over the situation. The imam listened to the students with great patience and suggested that they remain steadfast and calm, and avoid violence. He was the same person who, despite being injured in the police attack of December 15, 2019 reportedly “ran around with his family and associates to help the injured and ensure their safety” (The Frontline).

There are numerous videos on YouTube and those that are being circulated in the media where Muslim scholars from India are asking the people to continue their protest with calmness and restraint. Most of them are seen referring to the Hindu-Muslim solidarity and the need to stand together as citizens of the country. In many instances, they are seen seeking solidarity in the name of the “nation”. A few days ago, I received a document on my WhatsApp number; a press release of January 1, 2020, by the Society of Muslim Religious Scholars in Kolkata. The title of the resolution was, “Condemning the CAA and Opposing NRC and NPR”. The document referred to “constitutional values”, “democratic dissent” and invoked “rule of law”, “constitutionalism” and “pluralism” while asking Muslims to continue their protests in a peaceful manner.

One must remember that this is not the first time that Muslim scholars are invoking the idea of India. This engagement is also not merely a by-product of the ongoing protests. It has, rather, been a continuing commitment, even before India gained independence. Maulana Azad and others like him, have contributed greatly to this narrative. I remember, how in the past years, my WhatsApp got flooded with links of lectures by Muslim scholars on Muslim contributions to Indian freedom struggle as part of Independence and Republic Day celebrations.

While Muslims have been celebrating the idea of India since the beginning, it would not be wrong to assert that Muslim scholars have played a substantive role in safeguarding this narrative: The anti-CAA/NRC protests showcase recent instances of such contributions.

The writer is an alumnus of Aligarh Muslim University, senior research fellow at Jindal Global Law School and former assistant professor of law at National University of Juridical Sciences, Kolkata

For all the latest Opinion News, download Indian Express App

No evidence of COVID-19 transmission from pets to humans:...

Blow off your virtual graduation and watch these 15 speeches...

Harriet Oscar Nominee Cynthia Erivo Wants To Be In A Marvel...

What is amazing about Marvel is how these kinds of complicated roles do exist now...