Written by Maulshree Seth | Lucknow | Updated: July 1, 2020 9:13:25 am UP Congress chief Ajay Kumar Lallu confronts a policeman during the protest in Lucknow on Tuesday. (Express Photo by Vishal Srivastav) The Congress on Tuesday condemned... 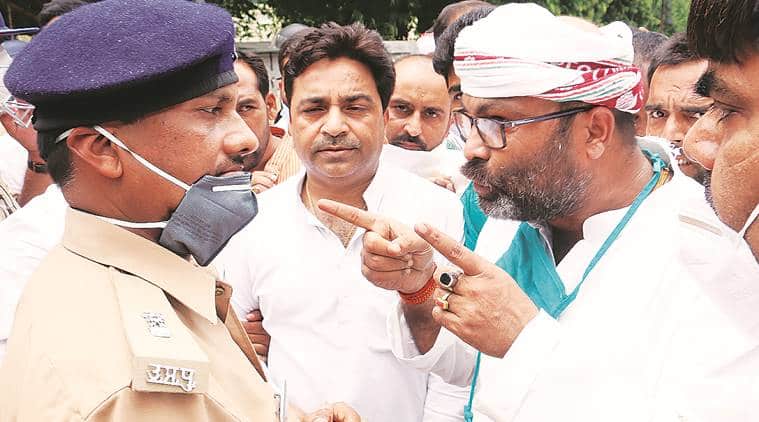 UP Congress chief Ajay Kumar Lallu confronts a policeman during the protest in Lucknow on Tuesday. (Express Photo by Vishal Srivastav)

The Congress on Tuesday condemned the arrest of party leader Shahnawaj Alam in connection with the December protests against the new citizenship law (CAA) and the National Register of Citizens (NRC). While Congress general secretary Priyanka Gandhi Vadra accused the BJP government of using police “as an instrument to suppress” the voices that question it, party leaders, led by state Congress chief Ajay Kumar Lallu and CLP leader Aradhna Mishra, hit the streets of Lucknow protesting Alam’s’s arrest.

“Leaders and workers of Congress are committed to raising the issue of people. While the BJP government can suppress other political parties by making police an instrument of suppression but it would not be able to stop us,” Priyanka tweeted.

She also uploaded a CCTV footage purportedly from Alam’s residence showing him being whisked away by police in plain clothes on Monday night. “See, how the UP Police has picked up our Minority Cell chairman in the dark of night.

Earlier, our state president was put in jail for four weeks in fake cases. Such action of the police is suppressive and unconstitutional. But soldiers of Congress would not be scared of fake cases and police lathicharge,” Priyanka said, referring to the arrest of Ajay Kumar Lallu on May 20 for allegedly providing fake documents of buses, which the party had arranged to transport stranded migrant labourers from the UP border to their home districts during the lockdown.

Meanwhile, Lallu and Mishra, accompanied by a number of party workers, were stopped outside the party office in the Mall Avenue area when they were trying to move ahead to protest Alam’s arrest. The protesters shouted slogans accusing Chief Minister Yogi Adityanath of using police whenever he is “afraid”.

Alam was arrested from Hazratganj area on Monday night in connection with the violent protest during an anti-CAA agitation on December 19 last year. Police said that Alam’s location was found near the violence spot.

Following the arrest, Lallu, Mishra and other party workers had reached the Hazratganj police station on Monday night itself. When some party workers started shouting slogans, police resorted to lathicharge.

Lallu said his party would start an agitation to protest Alam’s arrest. “If raising voice against undemocratic steps of the government is wrong, we will continue to do this and raise the voice of the common man,” he said. He said the government was “working to settle political scores and the way in which Alam was picked by the police without any notice is condemnable”.

In December, Congress leader Sadaf Jafar, retired IPS officer SR Darapuri and activist-lawyer Mohammad Shoaib were arrested for the protests against the CAA in Lucknow.

Make sense of SEO with this heavily discounted training bundle

Injecting this sensor under your skin could prevent future...

Many companies have been designed to optimize productivity when everybody is in...

During today’s Road To F9 festival in Miami, the long teased trailer for director...