Explained: How coronavirus can impact the economy and markets

By: Reuters | Updated: January 22, 2020 9:34:20 am Medical staff carry a box as they walk at the Jinyintan hospital, where the patients with pneumonia caused by the new strain of coronavirus are being treated, in Wuhan, Hubei province, China... Medical staff carry a box as they walk at the Jinyintan hospital, where the patients with pneumonia caused by the new strain of coronavirus are being treated, in Wuhan, Hubei province, China January 10, 2020. (Reuters Photo)

The outbreak of a new virus in China has sent shivers through world financial markets, with investors drawing comparisons to the 2003 SARS (Severe Acute Respiratory Syndrome) outbreak in order to assess its potential economic impact.

The following factbox collates the estimates of the economic impacts of past such episodes as well as individual company winners and losers from the current outbreak.

A 2017 paper by economists Victoria Fan, Dean Jamison and Lawrence Summers estimated that the expected annual losses from pandemic risk to be about $500 billion — or 0.6% of global income — per year, accounting for both lost income and the intrinsic cost of elevated mortality.

Another 2016 study by the Commission on a Global Health Risk Framework for the Future estimated that pandemic disease events would cost the global economy over $6 trillion in the 21st century — over $60 billion per year.

Isolating the impact of a single factor on global stock indexes and the global economy is a formidable task: they reflect a multiplicity of simultaneously competing factors ranging from economic data, company performance, and geopolitical shifts. In the middle of the SARS outbreak for instance, the US invasion of Iraq would have exerted an equivalent if not greater impact on price action.

However, price action in markets indicates that the impacts of such outbreaks are limited. After Chinese authorities reported the outbreak of SARS to the World Health Organization (WHO) in 2003, the MSCI China index of shares decoupled from its global peers – but made up the lost ground in only six months. 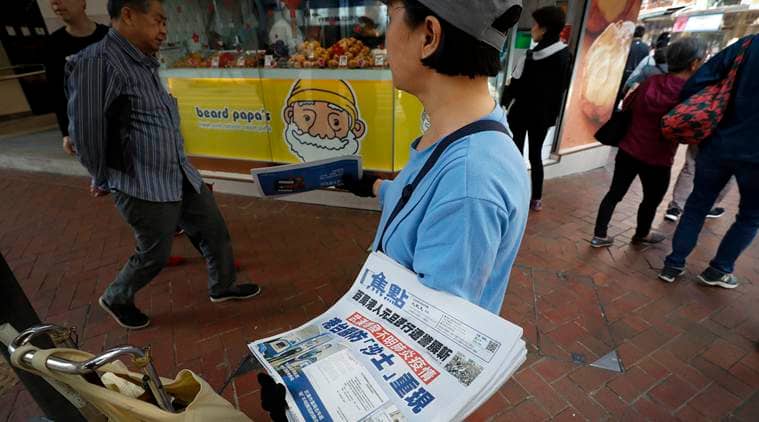 A vendor gives out copies of newspaper with a headlines of “Wuhan break out a new type of coronavirus, Hong Kong prevent SARS repeat” at a street in Hong Kong, Saturday, Jan. 11, 2020. (AP Photo: Andy Wong)

A paper by Jong-Wha Lee and Warwick McKibbin estimates the global economic loss due at SARS at $40 billion in 2003.

A May 2006 economic briefing by the International Air Transport Association (IATA) estimated that world gross domestic product suffered a 0.1% hit due to the outbreak.

Despite the disruption to the wider economy, virus outbreaks have tended to benefit pharmaceutical stocks, while tourism and travel-related stocks — hotels, airlines and luxury and consumer goods — tend to get punished. During the SARS outbreak, retail sales figures in China showed a marked drop-off as consumer spending took a hit.

Shares of long-haul flight operators Air France, Lufthansa and British Airways-owner IAG retreated, as news of the contagion raised concerns over disruptions to travel during a coming Chinese holiday. An IMF paper by David Bloom, Daniel Cadarette, and JP Sevilla notes that even when the health impact of an outbreak is relatively limited, economic consequences can be quickly magnified. The authors cite the case of Liberia during the 2014 Ebola outbreak, which saw GDP growth decline even as the country’s overall death rate fell over the same period.

“What scared people about SARS is the mortality rate,” ING Asia Pacific’s chief economist Robert Carnell said in a note to clients.

“People didn’t take public transport, stayed away from work, stayed away from shops, restaurants, cinemas, conferences etc. The impact from the disease was massive on the economy, but almost all of it indirect, due to the precautionary behaviour of the population.”

For all the latest Explained News, download Indian Express App

Echo Auto review: Alexa listens to you in the car

[unable to retrieve full-text content]The new phone is cheaper than the iPhone 8,...

YouTube reversed my bogus copyright strike after I threatened...

YouTube allowed Warner Bros. to copyright strike my livestream before it even happened....