The Iraqi man who threw his shoes at George W. Bush is a Twitter hero for today's protesters

Image: courtesy of Muntadhar al-Zaidi By Anna Iovine2020-06-04 20:52:37 UTC "Hope you know you're an actual icon and we love you," wrote Twitter user @StreaamLightsup to Iraqi journalist Muntadhar al-Zaidi. "This video is my daily dose... 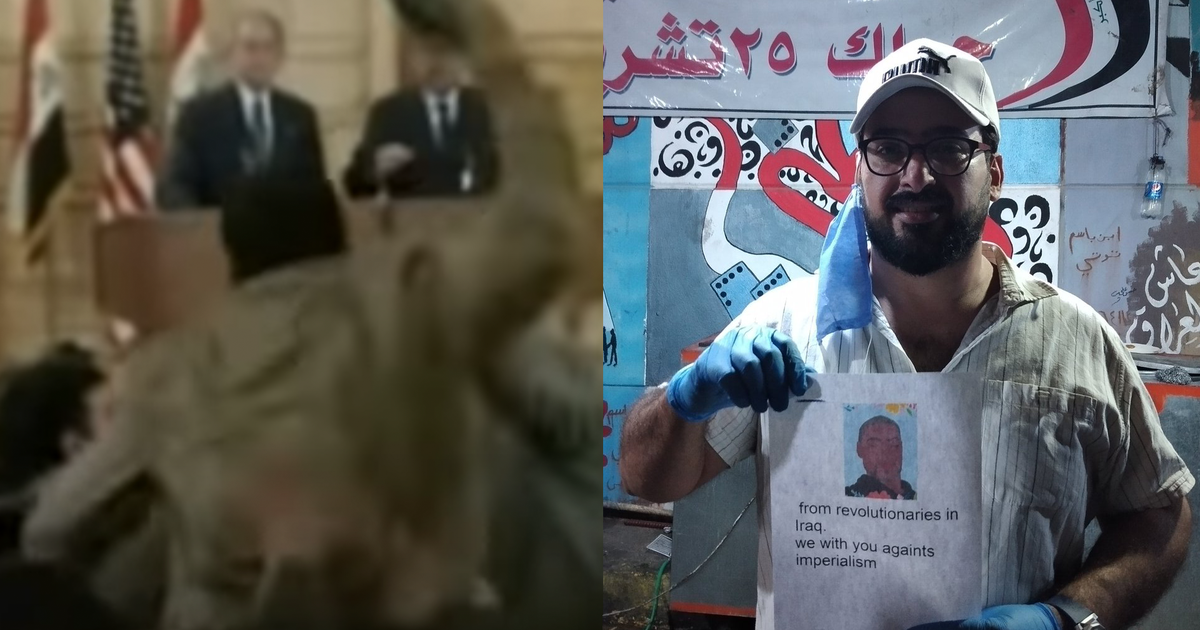 "Hope you know you're an actual icon and we love you," wrote Twitter user @StreaamLightsup to Iraqi journalist Muntadhar al-Zaidi. "This video is my daily dose of serotonin."

The video was one many Americans know on sight — when al-Zaidi threw his shoes at former President Bush in 2008.

@StreaamLightsup's tweet is just one of many praising al-Zaidi, who often issues charming responses of support. He's using the platform, where he has more than 56,000 followers, to stand in solidarity with the Black Lives Matter movement and the protesters calling out police brutality in the wake of George Floyd's killing.

The shoeing incident, as it's referred to on Wikipedia, occurred at a press conference at Iraqi Prime Minister Nouri al-Maliki's palace. The Iraq War had dragged on for five years at that point and ravaged the country. As al-Zaidi later explained in an op-ed in The Guardian, his duties as a journalist required him to report on daily tragedies. He would enter ruined homes, hear the screams of orphans — and he pledged to seek vengeance.

When he saw his opportunity to do so that day, he took it.

In the piece, al-Zaidi denied being a hero — but over a decade after "the shoe," his legacy as a hero has blossomed on social media. "Dude who threw the shoe at George W. Bush has done more for the betterment of America than most of its politicians and a huge segment of its actual populace," wrote another user on Twitter, @thankfulreact69. "Absolute king shit."

It's a sentiment many on social media share, especially after al-Zaidi publicly threw his support towards the current protests. Additionally, al-Zaidi has dedicated his freedom watch to Floyd.

"We stand in solidarity with these protest[ers] because they are oppressed," said al-Zaidi in an interview with Mashable. He said he'd been aware of the protests since George Floyd's death, and knew they would escalate. "We in Iraq have suffered from American power and authority since the occupation of the US military in 2003 so all the support, sympathy, and solidarity with them."

Not only are police inciting violence on peaceful protesters, but they're also targeting journalists. As a journalist himself, al-Zaidi said he stands in solidarity with them, and that the police are violating their rights.

He also said he knew from the beginning of Trump's presidency that he was spiteful of journalists. "Who[ever] hates journalists hates the truth," he said. "And Trump is the most untruthful person, so he is hostile to journalists because they convey the truth and he wants… the journalists to convey his lies."

Al-Zaidi pointed out that when protests erupted in Iraq last year, it didn't get nearly the same attention as the current U.S. protests. "In Iraq seven months ago we had demonstrations and more than 700 demonstrators were martyred by the Iraqi police without the world moving," he said.

Al-Zaidi's advice to young protestors and activists is to keep peaceful demonstrations. "The peaceful weapon does not belong to the arrogant, dictatorial, and oppressive states of freedom," he said. "Instead, it has weapons, prisons, police, and media."

Peaceful "weapons," al-Zaidi continued, are the best and longest-lasting weapons. "The authorities do not possess and do not want" these peaceful methods, he said, "so keep the peace as much as possible until your revolution triumphs."

The best weird social distancing tech of 2020 so far

8 of the best digital gifts and subscriptions

BTS 'Carpool Karaoke' just dropped and it's every bit as...

Clear the air with a sleek Dyson air purifier on sale for...

Cooking more than usual? Upgrade your kitchen with these...