Written by Sukrita Baruah | New Delhi | Published: June 2, 2020 2:26:09 am At Lajpat Nagar, Monday. (Express Photo by Abhinav Saha) Tied between the need for business and rising Covid-19 cases in the city, major market associations in Delhi... 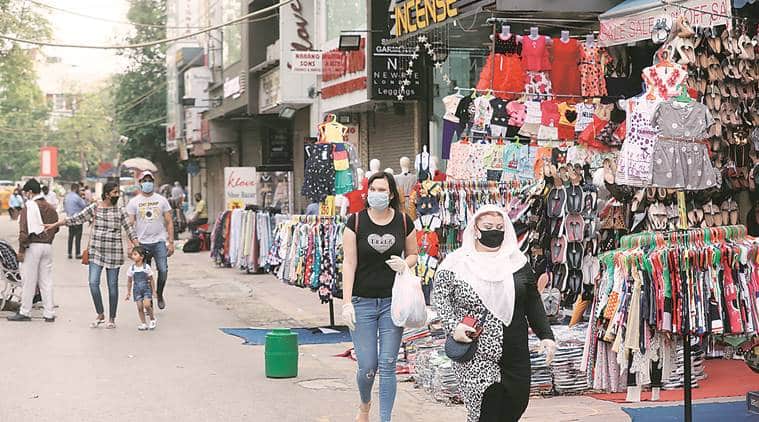 Tied between the need for business and rising Covid-19 cases in the city, major market associations in Delhi had a mixed response to the Chief Minister’s announcements that markets would no longer be bound by odd-even restrictions. And with several migrants having left the city and borders sealed for at least a week, the markets also said they were facing a crisis — of a sizeable portion of their workforce gone.

In the heart of Old Delhi, the Khari Baoli spice wholesale market is wracked with fears of the spread of the virus.

“We had been against the odd-even restrictions but the situation of the last three days, with over 1,000 cases every day, has changed everything and tensions are high. Around six shopkeepers here have tested positive. Now the fear is that with all shops opening, there may be an uncontrolled spread among shopkeepers,” said Vijay Gupta, president of the Khari Baoli Kirana Committee.

At the same time, sales had been lukewarm with the odd-even formula.

“There were no customers then, there will be very few now. This is not like South Delhi where a customer can park their vehicle right in front of a shop and be done with their work in a few minutes. Here, they have to park far away and walk for 15-20 minutes to the shop. The borders have also been sealed, so who do we sell to? Around 20-25% of the workforce also comes from NCR cities,” he said.

The exodus of the city’s worker population resonates in the markets. Rajesh Kumar of the Indian Federation of Trade Unions painted a picture to illustrate this: “If a showroom had 15 workers in it, now it only has 5. After 99% workers were not paid in the month of April, trust was eroded both in the government and their employers and a huge chunk made their way home. This is definitely going to impact businesses.”

At Sarojini Nagar market too, the loss of labour is one among many problems plaguing shop owners.

“Most of the people working in the stores are from Uttar Pradesh, Bihar and Jharkhand and 60% of them have returned to their villages. That is a big problem for shopkeepers, along with the completely changed circumstances — during odd-even, we had very few customers because there was limited public transport and because people are so fearful. I have a clothes store but people are not stepping out for non-essential shopping. Even paying rent is a struggle. With the growing number of cases, I don’t know what we can expect to see in our markets with all shops allowed to open,” said Ashok Randhawa, president of the Sarojini Nagar market association.

Chandni Chowk had also opened for the first time on Monday, in accordance with the initial odd-even formula, only to find out later in the day that all shops could now open.

“I don’t think this is a correct decision. The shops inside the gullies here are barely four-feet wide, and there is limited space for people to move in the central area of the market because of the ongoing redevelopment project. Social distancing is going to be difficult. It also seems like customer footfall will not be substantial,” said Sanjay Bhargava, president of the Chandni Chowk Traders’ Association.

Some, on the other hand, welcomed the announcement. Sanjeev Madan, president of the Traders Association, Lajpat Nagar, hailed it as a “very positive step”, voicing hope that this would increase footfall at the market.

“With the odd-even formula, daily customer flow was at about 10-15% of that before the lockdown. For one, customers were very fearful. There were also logistical issues — they don’t just come to the market for one thing, but they wouldn’t know which shop would be open on any given day. It is also very hot, and customers have no restaurant to stop at for something to drink or eat… The key is for us to ensure that safety protocol is followed, and we will soon begin publicising that to build confidence among our customers,” he said.

However, the city’s largest wholesale market, Sadar Bazar, continues to remain closed as it is located within a containment zone. “We have been closed since April 15, but 70% of the containment area is commercial where there have been no cases. There is no justification to our business being cut off in this manner when all other markets have been allowed to open. This is not more crowded than any other Old Delhi market,” said Paramjeet Singh Pammi of the Sadar Bazar association.

Varavara Rao discharged from hospital, sent back to Taloja jail in Navi Mumbai

Great Storytellers for Kids: Sukumar Ray, the king of Indian...

Tips for a cooler pregnancy in summer