Written by Seema Chishti | Published: July 5, 2020 6:15:44 am The Long and Winding Road: The Beatles with Ed Sullivan from their first appearance on Sullivan’s television show in February 1964 (Source: Wikimedia Commons) Well before television... 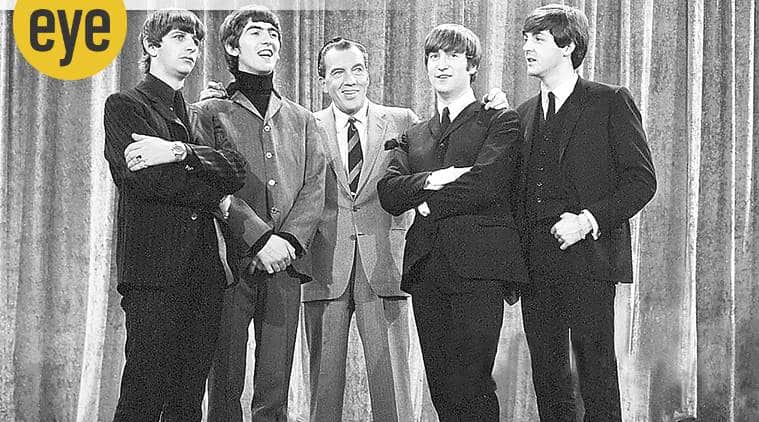 The Long and Winding Road: The Beatles with Ed Sullivan from their first appearance on Sullivan’s television show in February 1964 (Source: Wikimedia Commons)

Well before television ushered in the age of the celebrity, The Beatles were rock stars. Fifty years after their break-up, the Liverpool lads remain so. A BBC radio documentary on the quaint subject of the evolution of song fade-outs, made in 2010 by Stuart Maconie, paid tribute to how the Beatles revolutionised even that aspect of music. The two-minute long fade-out for Hey Jude in 1960 marked a complete break in how the ending of songs was to be imagined.

A special issue of LIFE magazine this April, marking The Beatles split half a century ago, offers a small window into why the band mattered. It describes how on their 1964 visit to New York, people “ran through the street against traffic, past mounted policemen, as they swarmed the Plaza Hotel, where the Beatles were still staying three days after their appearance on The Ed Sullivan Show.” The audience of 73 million for the show was not the only landmark. Fans watching The Beatles leave the plaza, included “New York Catholic archbishop Francis Cardinal Spellman, who had been born in the previous century.”

Hitting their prime two decades after the sun had set on the British empire, it was the Beatles, after the English language and the BBC, who ended up opening doors for British culture the world over. When they were not touring, they kept “office hours” at the now tourist hotspot, London’s Abbey Road studio – industriously managed by producer George Martin and other technicians. In some exceptionally productive times, they were able to record up to four songs a day, two before the lunchhour break and two after. From 1962 to 1970, they did a whopping 210 songs, almost all recognisable decades on – complete with clear sharp voices, complex music and lyrics.

The jury is out on whether the lyrics would command an honour in the way Bob Dylan’s could. Let it Be (1970), an all-time hit, remains a world-class ballad for all times but the Beatles never made the angst or dark side of the 1960s their primary preoccupation. They signalled concern on world events, but were original in what they had to say about it.

The Beatles prospered right through the polarising Cold War (1947-91) and their song Back in the USSR (1968) involved a cheerful shout-out to Ukraine girls “who really knock me out”. There is also the runaway hit, Revolution (1968), which mellifluously invokes the ways of Chairman Mao. In an interview with GQ in 2018, Paul McCartney does mention Blackbird (1968) as being his expression of protest against racism, but the Beatles were no exhorters to the marching public.

The quality of their songwriting may not have literary flourish, but whatever they did had the signature of freshness and elegance. A Day in the Life (1967) was literally stitched up from reports picked from news dailies, so it had the ability to speak to Everyman. The way they invoked common people in their music, talking about their names, hopes and hopelessness, touched a chord: Paperback Writer (1966), Dear Prudence (1968) and Eleanor Rigby (1966). Weeks would pass, and their songs would be stuck on top of radio charts.

In November 1963, at the Royal Variety concert in London at the Prince of Wales theatre, with the Queen Mother and Princess Margaret watching from the royal box, John Lennon urged those in the cheap seats to clap very loudly, and “for the rest of you, will you please jangle your jewellery?” The fact that they could get away with it, with their boyish charm and grins, only reflected the extent of the popular support they enjoyed.

India was to have its own special relationship with The Beatles via meditation, the sitar and the tabla. Mahesh Yogi hosted them at his ashram in Rishikesh, providing a new musical influence. After the split, George Harrison persisted with the sensibility he had got attuned to here.

The story goes that when The Eagles were parting ways in the middle of their association, news reporters asked them when they would sing together again. One of them muttered angrily: “When hell freezes over.” So that was the name of the album, Hell Freezes Over, when they came back to making music together in 1994.

There is no such comforting tale about The Beatles.

Perhaps, they ruled the music scene for so long only because they parted close to their peak. John Lennon was murdered tragically in New York just 10 years after the split, but not before he had delivered legendary hits even by himself. George Harrison died in 2001.

Paul McCartney remains the most visible connect to pop-history’s greatest band of the 20th century. Last year, the reclusive Ringo Starr and Paul McCartney appeared together at a concert to wild cheer, when McCartney presented his latest album Egypt Station to reasonable acclaim. What did they first perform together on July 14, 2019? Sgt Pepper’s Lonely Hearts Club Band (1967), of course.

How dating apps are booming as ideas of romance and intimacy evolve to meet the...

This smart backpack is designed for all of your travel...

[unable to retrieve full-text content]This bag has a minimalist design, but is also...